This tour is the perfect choice to those who seek adventure, tranquility without missing the main highlights of Cairo and Alexandria. The places of accommodation are very well selected to make sure you will have unforgettable experience during your stay.

Arrival; Cairo International Airport where D&B Tour Coordinator will assist you with customs clearance, luggage and airport procedures
Transfer in modern air-conditioned vehicle to Four Seasons Hotel at The First Residence
Check-in
Overnight at your hotel in Cairo
No Meals

Breakfast at your hotel in Cairo
Visit  The Pyramids of Giza and Saqqara Pyramid: Your Private Local Egyptologist will accompany you during a fascinating tour to:
Giza Pyramids: The only survivor of The Seven Wonders of the ancient world, visiting this magnificent cultural landmark may reveal some of the pharaohs’ secrets
Memphis: The oldest structures in Cairo date back only to the last couple of centuries BC during Greco-Roman period; however, on the fringes of the city stand the Giza Pyramids, some of the oldest structures on Earth. Despite their proximity to Cairo, the difference in age between the pyramids and the city itself are proof of their different histories
Saqqara Step Pyramid; Despite the fame of the Giza Pyramids, Saqqara is one of several other notable necropolis sites near Cairo that offer impressive sights and hold great archaeological significance
Overnight at your hotel in Cairo
Meals: Breakfast

Breakfast at your hotel in Cairo
Visit The Egyptian Museum and The Pyramids of Giza: Your Private Local Egyptologist will accompany you during a fascinating tour to:
The Egyptian Museum: Museum of Antiquities, commonly known as the Egyptian Museum in Cairo, which has a substantial collection of ancient treasures such as the tomb of King Tut and his funerary mask
Citadel of Saladin: An important example of military architecture from the middle ages near Muqattam Hills
Mosque-Madrassa of Sultan Hassan: This monumental mosque that was built during the Mamluk period in the 1300s
Khan El Khalili Bazaar: Explore and hunt for treasures in a souk in the historical center where you can shop for lamps, rugs, jewelry, and more
Overnight at your hotel in Cairo
Meals: Breakfast

Breakfast at your hotel in Cairo
Drive to Alexandria (almost 3 hour drive)
Visit The Bibliotheca Alexandrina, The Catacombs, The Roman Amphitheater & Citadel of Qaitbay: Your Private Local Guide will accompany you during a fascinating tour to:
The Bibliotheca Alexandrina: The major library and cultural center located on the shore of the Mediterranean Sea in the Egyptian city of Alexandria. It is both a commemoration of the Library of Alexandria that was lost in antiquity, and an attempt to rekindle something of the brilliance that this earlier center of study and erudition represented
The Catacombs: The catacombs of Kom El Shoqafa is a historical archaeological site located in Alexandria and is considered one of the Seven Wonders of the Middle Ages. The necropolis consists of a series of Alexandrian tombs, statues and archaeological objects of the Pharaonic funeral cult with Hellenistic and early Imperial Roman influences
The Roman Amphitheater: Also known as "Kom Al Dikka" was a well-off residential area in Graeco-Roman times. This archaeological site is featuring the remains of an ancient Roman theater, bath houses & villas with mosaics
Citadel of Qaitbay: The Citadel of Qaitbay also known as "The Fort of Qaitbay" is a 15th-century defensive fortress located on the Mediterranean sea coast, in Alexandria. It was established in 1477 AD by Sultan Al-Ashraf Sayf al-Din Qa'it Bay. The Citadel is situated on the eastern side of the northern tip of Pharos Island at the mouth of the Eastern Harbor
Lunch at Local Restaurant
Check-in at Four Seasons Hotel at San Stefano
Overnight at your Hotel in Alexandria
Meals: Breakfast & Lunch

Breakfast at your hotel in Alexandria
Visit The National Museum, Montazah Palace Gardens & The Royal Jewelry Museum: Your Private Local Guide will accompany you during a fascinating tour to:
The National Museum: The Alexandria National Museum in Alexandria was inaugurated the 31 December 2003 and it is located in a renovated Italian style palace. The building used to be home to the United States consulate
Montazah Palace Gardens: Montaza Palace is a palace, museum and extensive gardens in the Montaza district of Alexandria. It was built on a low plateau east of central Alexandria overlooking the beach on the Mediterranean Sea. The extensive Montaza Palace grounds first had "The Salamlek Palace", built in 1892 by Khedive Abbas II. The larger "Al-Haramlik Palace and royal gardens" were added to the Montaza Palace grounds, being built by King Fuad I in 1932
The Royal Jewelry Museum: The Royal Jewelry Museum is an art and history museum in Alexandria. It is located in the former palace of Princess Fatma Al-Zahra'. The building's halls contain an inestimable collection of jewels and jewelry of the Muhammad Ali Dynasty. 19th-century paintings, statues, and decorative arts are also exhibited in the rooms and lobbies. The museum was first inaugurated on 24 October 1986. After several years of renovations and expansion it was reopened in April 2010
Lunch at Local Restaurant
Overnight at your Hotel in Alexandria
Meals: Breakfast & Lunch

Breakfast at your hotel in Alexandria
Drive to El Alamein (almost 1 hour 30 minute drive)
Visit The Military Museum & The World War II Cemetery: Your Private Local Guide will accompany you during a fascinating tour to:
The Military Museum: Al-Alamein War Museum is located 105 kilometers west of Alexandria. It was built as a memorial of the Battle of Al Alamein , between the British and the Germans in 1942. The museum is one of the best places to visit in order to discover more about the World War II in Egypt
The Wold War II Cemetery: EL ALAMEIN WAR CEMETERY contains the graves of soldiers who died at all stages of the Western Desert campaigns, brought in from different areas, but especially those who died in the Battle of El Alamein in 1942 and in the period immediately before that.
Drive to Siwa (almost 6 hour drive)
Lunch Boxes to be provided in the vehicle
Check-in at Adrere Amellal Desert Eco Lodge
Dinner & Overnight at your Lodge in Siwa Oasis
Meals: Breakfast,Lunch & Dinner

Breakfast at your Lodge in Siwa
Visit The Mountain of The Dead, The Siwan House, Oracle Temple, Cleopatra Bath & Fitnas Island: Your Private Local Guide will accompany you during a fascinating tour to:
Mountain of the Dead: Also knows as "Gabal El Mawta" in Arabic. These tombs date to the late Pharaonic times and were reused for Roman burials
Cleopatra Bath: One of the many oasis springs of Siwa
Oracle Temple: The 26th-dynasty Oracle Temple is located in the northwest corner of the ruins of Aghurmi village. Probably built on top of an earlier temple. it was dedicated to Amun
The Siwan House: A small museum in Siwa displaying more about the daily life and Habits for Siwan people
Lunch at your Lodge in Siwa Oasis
Watch the sunset from Fitnas Island
Dinner & Overnight at your Lodge in Siwa Oasis
Meals: Breakfast, Lunch & Dinner

Breakfast at your lodge in Siwa Oasis
Visit The Old Shali: Your Private Local Guide will accompany you during a fascinating tour to:
Old City of Shali with its mud ruins and spectacular views of the oasis.
Lunch at your Lodge in Siwa Oasis
Safari 4X4 Tour: Discover the various depth of the Great Sand Sea. 4X4 vehicles will drive you to the desert for a half day safari where you can see the petrified forests, fossilized sea shells. Cruise on the top of curved sand dunes with a chance to swim in cold, warm and hot lakes and springs.
Bedouin Dinner
Overnight at Your Lodge in Siwa Oasis
Meals: Breakfast, Lunch & Dinner

Day 9 / Drive back to Cairo

Breakfast at your lodge in Siwa Oasis
Drive back to Cairo (Almost 9 hour drive)
Check-in at Le Meridien Cairo Airport
Overnight at Your Hotel in Cairo
Meals: Breakfast

Breakfast at your hotel in Cairo
Check out
Your Tour Coordinator will escort you to Cairo International Airport to board your flight home
Meals: Breakfast

Four Seasons at the First Residence

Flanked by zoological gardens and the western bank of the Nile, our address in Giza’s prestigious First Place complex puts you in the centre of it all. Catch a glimpse of the river or the Great Pyramids from your room as you head out to explore the ancient wonders, or spend the day by the pool, indulging in an aromatic massage once reserved for Egyptian royalty. Or opt for shopping in the high-end boutiques at the First Mall or experience the best of gastronomy aboard our newly opened First Nile Boat, offering panoramic Nile views and brilliant international cuisine. 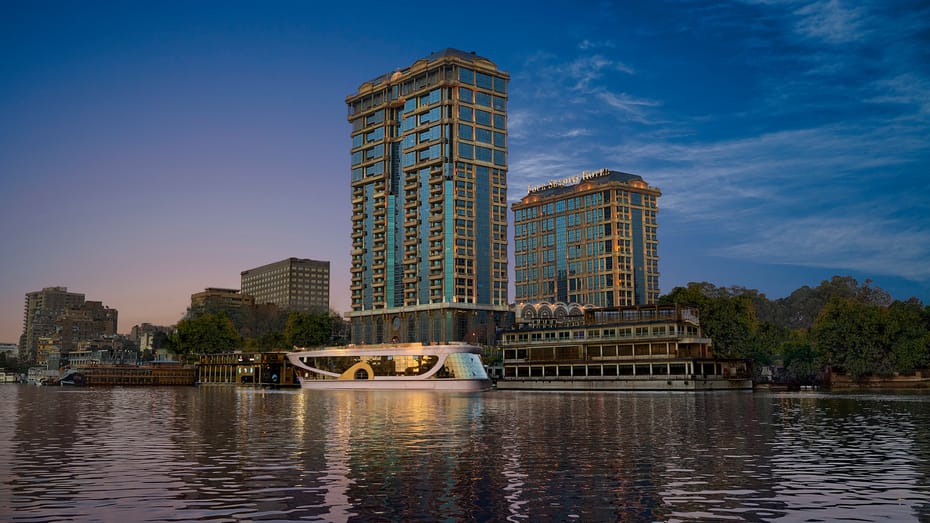 Four Seasons Alexandria is the most luxurious hotel in Alexandria and it features a magnificent resort overlooking the Mediterranean Sea setting with a private sandy beach. Enjoy a full-service spa, outdoor pool and terraced restaurants with fresh sea breezes. Guests can enjoy free WiFi throughout the property and in the guest rooms.
All the hotel rooms have a balcony, overlooking either the Mediterranean Sea views or the City. The hotel offers elegant restaurants and lounges serving a diverse selection of local seafood and international specialties including Lebanese and Italian fine-dining to contemporary Mediterranean favourites – café snacks, cocktails and gelati. A Shisha corner is also available.
The Four Seasons resort-style hotel embodies modern Alexandria and its unique cosmopolitan flare 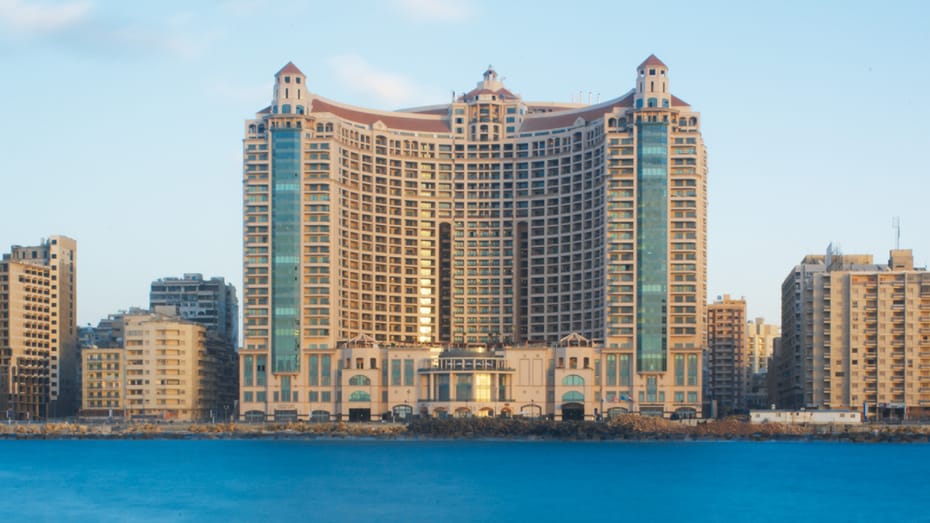 This legendary Desert Eco Lodge is considered one of the best Eco-lodges all over the world and is a destination for all the guests seeking tranquility. This Lodge is located at the foot of the "White Mountain" and it is made of earth buildings that blend naturally into the landscape. Adrère Amellal has been built with indigenous material using traditional Siwan building techniques and styles which have a minimal impact on the environment. Kershef, a mixture of sun-dried salt rock mixed with clay, is used for wall building. This material maintains indoor temperatures at moderate levels. Ceilings are made of palm beams, while doors, windows and fixtures are made of olive wood from annual tree trimmings. Furnishings are simple, yet of the highest quality, drawing exclusively on local materials and designs.Each one of its hand-built 43 rooms is unique, combining distinction and authenticity. All the furniture and crafts pay tribute to nature and to talented local artisanship. With no electricity, the rooms are softly lit with a dozen beeswax candles and the starry sky. Most of the mainly organic food is grown in the grounds or sourced locally, so vegetables and fruit are bursting with flavor. 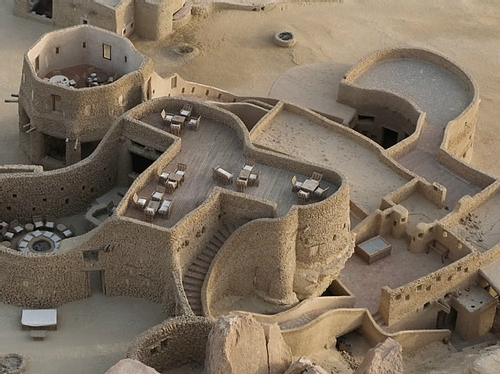 Le Méridien Cairo Airport is conveniently situated inside Cairo International Airport. There is a connecting bridge between the Hotel and Terminal 3 which makes This main terminal a few minutes wake from the hotel. The hotel provides inspiring cuisines & comfort. Guests' rooms are designed to reflect the ultimate comfort, provided with Le Méridien signature beds and several amenities such as LCD wall mounted TV’s and complimentary high speed internet access.

Prices are quoted in US Dollars per person per trip and valid till September 2020, except during Christmas, New Year & Easter holidays.

To be published soon