Finally,Egypt reopened its oldest pyramids to tourists after more than 50 years

Think you have visited all Egypt’s Pyramids? I’ll bet you didn’t, because Egypt has just opened two of its earliest pyramids to visitors for the first time since 1965

The pyramids located in Dahshur; it is considered the home to Egypt’s earliest pyramids, the rocky Plateau that was selected by Sneferu the Egyptian Pharaoh; to build his graveyard, to rival his father’s Pharaoh Zoser, the owner of Saqqara Pyramid.
The opening ceremony was held in Giza it is almost 40 kilometers (25 miles) south to Cairo the capital, and has been attended by Egyptian officials in the presence of Minister of Antiquities and foreign and African diplomats who travelled to Dahshur to participate in the inauguration included the envoys of Germany, Italy, France, Britain, Hungary, Cameron, Congo. 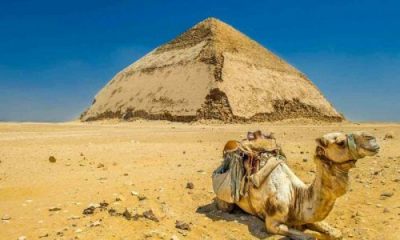 The Minister of Antiquities described the Bent pyramid as one of the most important tombs in the area of Dahshour, due to the wonderful engravings, writing, and texts dated to the historical area of Dahshur. He said that “the Bent pyramid is a transitional phase in the evolution of the pyramids between the Pyramid of Zoser pyramid and the Red Pyramid built by King Senefro in Dahshur, then he added “during the discovery process, a beautiful “kartolage” mummy was found in all its style and accessories”. The tomb was closed for development and renovation. Now it is the first time to this tomb to be opened to visitors since 1965, according to the Minister of Antiquities Khaled al-Anani. Tourists now will be able to climb a narrow 79-meter tunnel from a high entrance on the north face of the pyramid to reach two rooms deep into the 4600-year-old building. They will also be able to enter the 18-meter “side pyramid”, which is owned by the wife of Sneferu, which was opened in 1956. The promotion of the Dahshur Pyramids is part of a wider tourism development effort, which is an important source of foreign revenues to Egypt, which declined significantly after the 2011 revolution.

Egypt has opened Dahshur Bent Pyramid to visitors, who can now go down through its tunnels to visit the chambers inside, Dahshur Bent Pyramid was closed since 1965, it is now reopened after serious renovation and development and consolidation of its internal structure, today it includes a lighting system, a pathway for visitors and it has become now one of Egypt new discoveries

After the inauguration, the ministry announced an Egypt New Discoveries of a Middle Kingdom winding wall almost 300 meters south of King Amenemhat II’s pyramid at Dahshur, Egyptian archeologists also have uncovered a collection of stone, clay and wooden sarcophagi, some of them with mummies.

Private Day Tour to The Egyptian Museum and Giza Pyramids

Private Day Tour to The Egyptian Museum, Islamic Cairo and The Bazaar