30 kilometers south of Cairo, Egypt is an archaeological site in Saqqara where new discoveries from Ancient Egypt have been revealed. The Saqqara plateau has at least 11 pyramids, along with hundreds of tombs of ancient officials. Unearthed by Egyptian archaeologists was a number of Sarcophagi buried for 2,500 years. The initial discovery was 13 coffins, then in later news was announced 27, and now a total of 59 coffins were discovered. 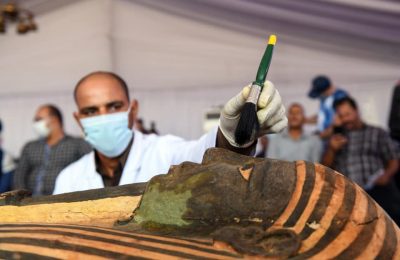 Inside a newly-discovered well in Saqqara, experts say that this discovery is the largest of its kind and is only the beginning of more to come. The Tourism and Antiquities Minister, Khaled al-Anani added that there is still an unknown number of coffins yet to be unearthed in the same area, near the 4,700-year-old Pyramid of Djoser. The sarcophagi were displayed and one of them was even opened before reporters to show the mummy inside. In fact, several foreign diplomats attended the announcement ceremony.

As informed by the secretary general of the Supreme Council of Antiquities, Mostafa Waziri, initial studies showed that the decorated Sarcophagi were made for priests, top officials and elites from the Pharaonic Late Period dating from 664 to 525 B.C. He also said that archaeologists found 28 statuettes of Ptah-Soker; the main God of the Saqqara necropolis, as well as a 35cm tall bronze statuette of God Nefertum, inlaid with precious stones and the name of its owner is written on the base; Priest Badi-Amun. Collections of amulets and a ushabti figurine were also found. This discovery has been collected from 3 different wells in the same area, but with different depths ranging from 10 to 12 meters deep.

Ancient Egypt has been the preeminent civilization in the Mediterranean world for almost 30 centuries. Egypt’s mysteries have long entranced archeologists and historians and has even created a field of its own study; Egyptology. Sources of information about Ancient Egypt come to us through monuments, objects, artifacts and more things recovered from archaeological sites. Ancient Egypt has left a lasting legacy. Monumental ruins have inspired travelers and writers for centuries. Achievements of the Ancient Egyptians include construction techniques that supported the building of pyramids, temples, and obelisks, a practical and effective system of medicine, new forms of literature, and a lot more. 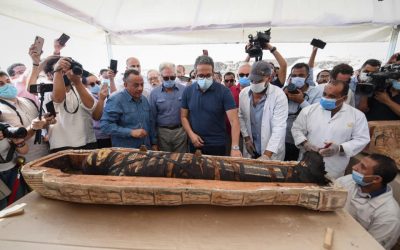 The Sarcophagi are said to join another 30 ancient wooden coffins, which were discovered in October in Luxor and will all be showcased the Grand Egyptian Museum. The discovery of the 59 Sarcophagi is the latest in a series of archaeological finds and the country has sought to publicize this in effort to revive tourism, which was badly hit by the turmoil that followed the 2011 uprising and again this year by the global Coronavirus pandemic.

With tomb robbery taking its tole on Egypt’s antiquated history, it’s amazing how there is so much yet to be discovered about Ancient Egypt. These untouched, colorful and well-preserved coffins were found all stacked on-top of each other, without any signs of being opened since the initial burial. According to reporters who had attended the ceremony, one of the wooden Sarcophagi had a mummy of a priest, wrapped in an ornate burial cloth decorated to resemble the deceased’s face. 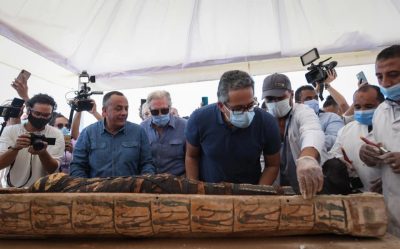 Many were concerned about the opening of sealed mummies and inquired if it was a good idea. This is in regard to the belief that opening up tombs of coffins may bring bad luck. This was a myth popularized after an article in National Geographic talks about the curse of the mummy after the 1922 discovery of King Tutankhamun’s tomb. This is because the sponsor of the excavation; Lord Carnarvon died of blood poisoning soon after the coffin was opened.  Nevertheless, this remains only a myth as the truth is, only 6 of 26 excavators present at the opening of the tomb died within a decade.

The discovery marks the largest number of coffins found in one burial place since the discovery of the Asasif Cachette, which was another discovery in October of 2019. This discovery also held 30 intact, sealed and painted coffins of priests and priestesses from the 22nd Dynasty in Asasif necropolis in Luxor. The discovery of the coffins in Saqqara is the first major announcement since the pandemic in Egypt, which led to the closure of museums and archaeological sites for around three months from late March.

The Saqqara necropolis is found 30 kilometers south of Cairo and is part of the ancient capital city of Memphis. It is also the site of the colossal rectangular-based step Pyramid of Djoser. Make sure you plan your next trip out to visit all the amazing necropolis of Ancient Egypt, and also visit the Grand Egyptian Museum where all these discoveries will be laid out and displayed to the public.

Explore Cairo and Luxor in 5 days