When you land in Amman International Airport, your trip will commence when our tour coordinator welcomes you and assists you with your transportation to the Regency Palace Amman Hotel; a 5-star hotel, of course. You will have the chance to enjoy meals at the hotel as well as dine out during your tours and adventures.

The first day of exploration will be day 2 of your trip where you will get a chance to visit Jerash, Ajlun and the Dead Sea. Jerash is one of the main tourist attractions in Jordan that you must never leave without visiting. The ancient city is an interesting Roman site and holds many attractions to see such as the Roman Ruins, for example. Up next is Ajlun; another city in Jordan that is home to the Ajloun Castle and the Ajloun Forest Reserve. Before heading back to Amman, you will be visiting the Dead Sea which is over 400 meters below sea level. The name comes from the inability of life for any aquatic organism such as fish or plants due to its high salinity. This is also a reason why you will find yourself floating easily if you ever swim there.

The next day is when you will get a chance to explore Amman more freely as you will only be visiting the Desert Castles. This string of castles and fortresses will leave you mesmerized. The castles are Qasr Amra, Qasr Azraq and Qasr Al Kheraneh. If you wish to enjoy the rest of your day in Amman, you could visit Souk Jara; a wonderful market next to Rainbow St. with handicrafts, antiques, food, art and more!

Day 4 of your 7 days in Jordan itinerary will take you to Madaba, Mount Nebo and Karak after you’ve checked out from your hotel in Amman. A visit to these amazing sites is where you will find out of the ordinary attractions. Check out the Byzantine and Umayyad mosaics when you take a drive to Madaba. Also, look at the Dead Sea from a different perspective when you’re at the top of Mount Nebo and finally, find out more about the Crusaders’ Fort in Karak. You will then head over to Petra where you will be staying in another luxury hotel; Movenpick Petra Hotel.

The next two days will be spent exploring Petra, Wadi Rum and Aqaba. You will have a chance to enter Petra through the narrow gorge and discover the dazzling colors and formations of the rocks. Wadi Rum is an adventure in which you will enjoy a 2-hour Jeep Tour inside the oasis where you will also visit the Spring of Larence, Khazalee Mountain and Sand Dune. Your 7 day Jordan tour will come to an end the day after that when you enjoy a delicious breakfast at your hotel, get transferred to Aqaba International Airport to board your flight back home.

With Dunes & Beyond, we make sure that your 7 day Jordan tour is well-spent by our growing efforts at providing only the highest quality services, the most luxurious of tour packages and competitive prices that will save you any hassles during your trip, so you only have to think about having fun and enjoying your stay. Book your Jordan itinerary with Dunes & Beyond today and start your luxurious journey.

Breakfast at your hotel in Amman
Visit  Jerash, Ajlun and Dead Sea
Jerash: Transfer to Jerash. A close second to Petra on the list of favorite destinations in Jordan, the ancient city of Jerash boasts an unbroken chain of human occupation dating back more than 6,500 years. Jerash lies on a plain surrounded by hilly wooded areas and fertile basins. Conquered by General Pompey in 63 BC, it came under Roman rule and was one of the ten great Roman cities, the Decapolis League
Ajlun: Continue to Ajlun - The marvels of nature and the genius of medieval Arab military architecture have given northern Jordan two of the most important ecological and historical attractions in the Middle East: the sprawling pine forests of the Ajloun-Dibbine area, and the towering Ayyubid castle at Ajlun, which helped to defeat the Crusaders eight centuries ago. Ajlun Castle (Qal'atAr-Rabad) was built by one of Saladin's generals in 1184 AD to control the iron mines of Ajlun, and to deter the Franks from invading Ajlun
Dead Sea: Continue to the Dead Sea hotel where there will be the opportunity to float in the therapeutic waters.  Dead Sea is over 400 meters (1,312 ft.) below sea level. The lowest point on the face of the earth, this vast, stretch of water receives a number of incoming rivers, including the River Jordan. Once the waters reach the Dead Sea they are land-locked and have nowhere to go, so they evaporate, leaving behind a dense, rich, cocktail of salts and minerals that supply industry, agriculture and medicine with some of its finest products.
Overnight at your hotel in Amman
Meals: Breakfast

Breakfast at your hotel in Amman
Visit Desert Castles
Desert Castles: Transfer to visit the Desert Castles, taking you on a journey to the flourishing Islamic civilization of the Umayyad Dynasty, A string of castles, caravanserai, fortresses and retreats adorn your desert trail and paint a mysterious, exotic picture of hunting life and recreation in     those old times, those castles are Qasr Amra, Qasr Azraq and Qasr Al Kheraneh
Dinner at Kan Zaman Restaurant in Amman or similar
Overnight at your hotel in Amman
Meals: Breakfast & Dinner

Breakfast at your hotel in Amman
Check-out
Visit Madaba, Mount Nebo & Karak
Madaba: Drive to Madaba Best known for its spectacular Byzantine and Umayyad mosaics, Madaba is home to the famous 6th century Mosaic Map of Jerusalem and the Holy Land.
Mount Nebo: Continue to visit Mount Nebo, the mountaintop memorial of Moses with captivating views of the Jordan Valley, Dead Sea
Karak: Then drive to Karak to see the famous crusaders’ fort - The fort itself is a dark maze of stone-vaulted halls and endless passageways.
Drive to Petra
Transfer to Movenpick Petra Hotel
Check-in
Overnight at your hotel in Petra
Meals: Breakfast

Breakfast at your hotel in Petra
Visit Petra
Petra: Petra the world wonder, is without doubt Jordan’s most valuable treasure and greatest tourist attraction. It is a vast, unique city, carved into the sheer rock face by the Nabateans who settled here more than 2000 years ago, turning it into an important junction for the silk, spice and other trade routes that linked China, India and southern Arabia with Egypt, Syria, Greece and Rome.
Entrance to the city is through the Siq, a narrow gorge, over 1 kilometer in length, which is flanked on either side by soaring, 80 meters high cliffs. The colors and formations of the rocks are dazzling. As you reach the end of the Siq you will catch your first glimpse of Al-Khazneh (Treasury). A massive façade, 30m wide and 43m high, carved out of the sheer, dusky pink, rock-face and dwarfing everything around it. It was carved in the early 1st century as the tomb of an important Nabatean king and represents the engineering genius of these ancient people.
Overnight at your hotel in Amman
Meals: Breakfast

Breakfast at your hotel in Petra
Check-out
Visit Wadi Rum
Wadi Rum: Transfer to Wadi Rum which is a stupendous, timeless place, virtually untouched by humanity and its destructive forces, so elegantly described by T.E. Lawrence as “vast, echoing and god-like”. Also known as ‘The Valley of the Moon’, this is the place where Prince Faisal Bin Hussein and T.E. Lawrence based their headquarters during the Arab Revolt against the Ottomans in World War 1, and their exploits are intrinsically woven into the history of this amazing area.
Jeep Tour will be arranged by Bedouin jeeps (about 2 hrs) inside Wadi Rum to include Spring of Lawrence area then Khazalee Mountain and Sand Dune.
Drive to Aqaba
Transfer to Movenpick Resort Hotel
Check-in
Overnight at your hotel in Aqaba
Meals: Breakfast

Breakfast at your hotel in Aqaba
Check out
Transfer to Aqaba International Airport to board your flight home
Meals: Breakfast

Soaring above the city of Amman, the Regency Palace enjoys unparalleled central location in the prestigious and commercial district of “Shmeisani”, steps away from the royal cultural center and sports city, overlooking the skyline of Amman’s upcoming “Abdali” downtown area. The hotel is within easy reach of all the city’s sites, business centers, shops, and attractions.

The Mövenpick Resort Petra is located directly at the entrance to the historic Jordanian city of Petra. This resort with an oriental flair features an exciting combination of natural stone, handcrafted wood and Middle Eastern fabrics and textures. With 183 rooms and suites plus a wide variety of restaurants for your culinary cravings, the Mövenpick Resort Petra will certainly provide long lasting memories. Enjoy your time spent in one of the world’s most extraordinary destinations. 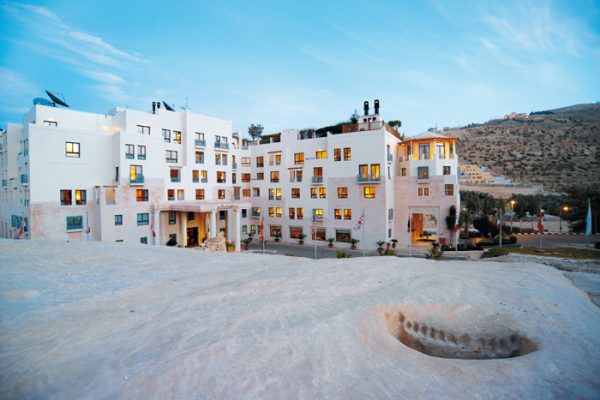 The Movenpick Resort & Residences Aqaba is located in the centre of Aqaba Jordan, with a magnificent view of the stunning waters of the Red Sea and coloured mountains, provides guests direct access to their own private beach. 10 km from King Hussein International Airport, near the archeological sites of the Islamic city of Ayla. This architectural delight features a mix of European and Arabesque designs, reflecting a homely feeling. The resort combines grandeur, luxury and welcoming hospitality.