Minister of Antiquities Dr.Khaled El-Enany announced Saturday the 2nd of February 2019 the first discovery of year 2019 from Tuna El-Gabal archaeological site in Minya at the South of Egypt.
A joint mission from the Ministry of Antiquities along with Menia University has stumbled upon a collection of Ptolemaic burial chambers engraved in rock and filled with almost fifty mummies of different sizes and genders. This is considered the third discovery in Tuna El Gabal over the past three years. 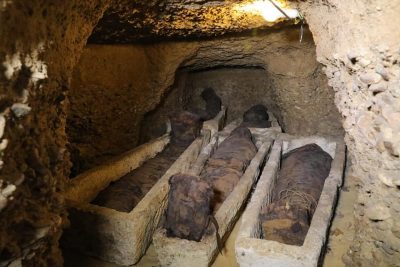 The Minister of Tourism, Minya Governor, Secretary General of the Supreme Council of Antiquities, along with ambassadors and cultural attaché from 11 foreign countries have attended the announcement ceremony held on site. 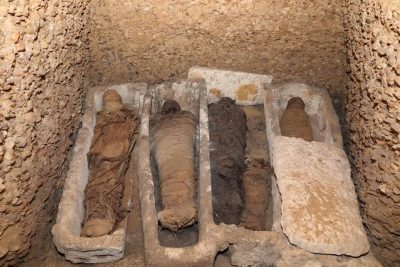 The cemetery consists of several burial chambers inside it found a large number of human mummies of different genders and age. All are in a very good condition and among them found mummies of children wrapped in linen, or decorated with Demotic handwriting. Mummies of men and women were also unearthed.

Dr.Wagdi Ramadan, Head of the mission stated that the mission started the work for the first time in Tuna El-Gabal in February 2018. This mission discovered a tomb engraved in rock composed of a corridor leading to sloping stairs that opened to a rectangular chamber with a number of burials.

Tuna El Gabal archeological site has several tombs including the tomb of Petosiris, Isadora, a sacred animal ceremony, a Roman cemetery and two frontier reliefs of king Akhenaten.
The event was an important message to the whole world that Egypt “has it all.”