As we all know the food is a large part of any country’s culture. In order to get to know the country you are visiting better, you must take a look at its traditional food.

In this article, we will take you for a trip to explore the Egyptian cuisine and will let you know the best dishes you should try whenever you visit.

As known, Egypt sits along with the fertile Nile River Valley so the Egyptian cuisine makes heavy use of legumes, vegetables, and fruit from it. Egyptians are credited as being one of the first groups of people to practice agriculture on a large scale as the civilization of ancient Egypt allowed the Egyptians to build an empire on the basis of great agricultural wealth and they grew a variety of crops for consumption.
Most common meats in the Egyptian cuisine are (rabbit, pigeon, chicken, duck, lamb, and cows).

11 traditional Egyptian dishes you must try.

1- Ful Medammes: or simply “Ful” a dish of cooked fava beans served with vegetable oil, cumin, salt. Ful is the most common traditional breakfast, it can be made at home however it requires a long time (a day or maybe longer) so you can either buy it from the local markets/grocery stores and you just need to heat it. Ful can be made in different ways; you can put chopped onions, garlic, and parsley, chili pepper, lemon juice, and other vegetables. You can also try to smash boiled eggs on it with the oil and salt, some people like it this way. You can find a lot of street carts that serve Ful in the early morning; it is also served in some really fancy restaurants. You can always ask your tour company about the most popular places to serve Ful or any other food you want to try. 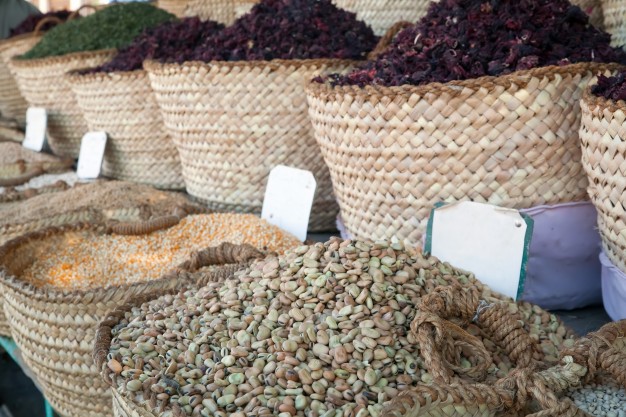 2- Falafel: Also known as “Ta’meya”, it is the Egyptian version of Lebanese falafel, it is a mixture of fava beans, onions and lots of fresh herbs. It is also a common traditional breakfast and Egyptians love it and they can have it not only for breakfast but also for brunch and dinner as well! You must try it with tahini sauce on Egyptian bread and you will feel like you will eat it every day.

3- Molokhia: A green herb soup is a primarily liquid food generally served warm or hot, it is basically the leaves of Corchorus olitorius commonly known as The Arab’s mallow. It is used as a vegetable, traditionally cooked with the chicken stock, chopped fried garlic and ground coriander served with white rice, you can also eat it with bread or with your spoon just like the soup, Molokhia is considered as one of the most popular main dishes in the Egyptian cuisine and you won’t regret trying it.

5- Koshary: an interesting mix that that was originally made in the 19th century made of rice, macaroni, and black lentils mixed together topped with a spiced tomato sauce made with garlic and vinegar garnished with fried onions, hot sauce is optional. Koshary popularly found on the streets carts and restaurants. It is considered one of the most traditional Egyptian food as it’s a cheap and filling meal and it is amazingly delicious. 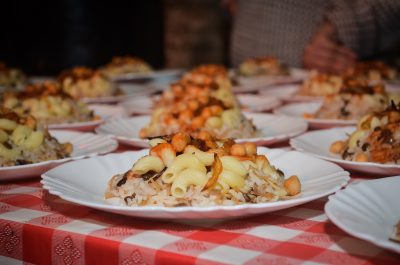 6- Mahshi: if you are a vegetarian then that is the food for you! One of the most surprisingly delicious food and it is all veggie. It is basically a stuffed vegetable with a mix of rice, fresh herbs and tomato sauce filling, such as eggplants, bell peppers, tomatoes, grapevine leaves, and zucchini. It is a must try dish while you are in Egypt and you are going to fall in love with it from the very first bite.

7- Fattah: It is known to be a very peculiar and ancient dish of the Egyptians, originally served on special occasions, such as to celebrate a woman’s first pregnancy, or big feasts and weddings. It is a combination of crispy bread topped with rice, meat and garlic, and vinegar flavored tomato sauce. A simple and filling main dish you will find appealing.

8- Roz Me’ammar: or oven rice. A dish that is popular in Upper Egypt. Basically, it is white rice loaded with butter, milk, and cream mixed and baked in the oven, can be salty or sweet, usually served in a family gathering and occasions.

9- Besarah: Another perfect food for vegetarian. Green creamy mashed fava beans with parsley, dill, and spices topped with fried onions, you can eat it with bread as a dip and it is popular for breakfast.

10- Alexandrian liver and sausages: Another great street food. Named after Alexandria the city as they are famous for that dish. You can either have the liver or the sausages in a sandwich or you can just eat it with the bread just like the dip, it is common to use bread with different kinds of Egyptian food. Basically, it is a chopped liver or sausages with chopped onions, garlic, and jalapenos with spices and just adds the tahini sauce and you are ready to have one of the most delicious sandwiches ever. 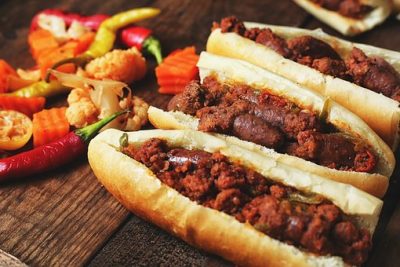 11- Umm Ali: means “Ali’s mother”: Of course, you need to try Egyptian desserts, and what is better than Umm Ali! A puff pastry blended with pistachios and raisins, sugar, milk poured over the mixture. This dish that goes back to the 13th century, legend has it that Sultan Ezz El-Din Aybak’s wife made it for a victory celebration where it was made and shared amongst people of the land. Since then it became famously known after her. Served while hot and you will find it a hit! It is one of the most delicious desserts in Egypt and we love it! 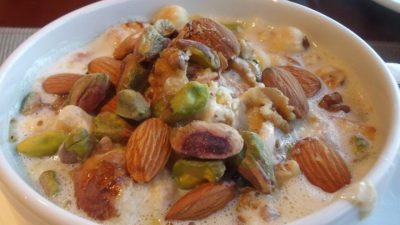